Thanks to Betty Beguiles for hosting this fun!

B. and I met at Catholic Match (catholicmatch.com)

Our first date was at a professional hockey game on the day after Christmas. First we went to eat at a A “fancy diner” and then we went to the game. A lot of the women at Catholic Match said you shouldn’t go to a game or a movie on your first date, but I had a wonderful time.

For my thirtieth birthday, B. told me he was giving me something I had wanted for a long time. I thought it was going to be an engagement ring. It was a quilt rack.

About a month and a half later, he did propose. It was a Sunday night (October 19, 2008). The whole weekend he had been acting nervous and irritable. We were watching the Red Sox play the Devil Rays. The game was obviously over – my Sox were not going to the World Series. Later, B. said that someone was going to be happy with the outcome of the game- he hates the Red Sox. He asked me what I had planned after work that week. I told him, including the nights I didn’t have plans, and he asked me if I wanted to go shopping on Thursday. Shopping? He said we could pick out an engagement ring for me. I was dumbstruck. Of course I wanted to go shopping. I found out he had been nervous because Saturday morning, he had gone ring shopping, but he didn’t buy a ring yet, because he wanted to make sure I liked the ring. When we did pick it out, the salesman went to do some paperwork, and when he came back, he said “Did you tell her yet?” B. said “Tell her what?” And the salesman said, “That it was the same ring you picked!”

We had been dating for ten months when we got engaged, and we were engaged for 6 months and two weeks.

We don’t have any children yet, but we have four rabbits and a cat. I never pictured myself with five pets, but when we got married, I figured we’d never have pets, because B. had never had any and didn’t think he wanted to… all five pets were his idea. I was sad to think I wouldn’t be sharing my house with furry friends, but I figured it was worth it.

We are not very exciting. Our favorite things to do together include going to Mass, watching sports, going for walks, and eating breakfast.

Our song is “What the World Needs Now Is Love” written by Burt Bacharach (and sung by Jackie DeShannon). B. got the idea for this being our wedding dance song after watching “Austin Powers.”

We were married at our parish and had our wedding reception at a nearby seminary. They are both beautiful places and we got some awesome pictures. For our first anniversary, we ate at the restaurant where we had our first date and went to the seminary to walk around and take pictures in some of the places where we got pictures the year before.

We will be married two years on May 16. We have so much ahead of us, it still feels like we’re newlyweds. I can’t wait to see what the future holds for us.

I love you, my Knight in shining armor! 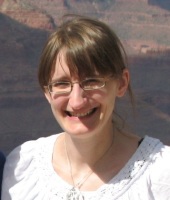